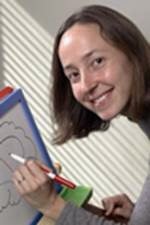 Dr. Justine Larson started medical school thinking she might pursue obstetrics–gynecology. The specialty appeared to combine her desire for long-term patient relationships with her interest in public health advocacy.

"Then I found out that ob–gyn was a surgical specialty," Dr. Larson (pictured, at left) says. "That was not what I wanted to do!"

Dr. Larson eventually performed a psychiatry rotation—and discovered that it ticked all the boxes for what she wanted in her medical career. "I realized psychiatry is great, because it's the intersection of psychosocial issues, sociopolitical and cultural factors, and biology and neurobiology. I also loved that you could have very close relationships with patients over time," she explains.

Her path took her through Harvard Medical School (Boston, Mass.), where she received her doctorate of medicine in 2001. She then completed a pediatrics internship at the Massachusetts General Hospital for Children (Boston), and two residencies: one in general psychiatry at the Harvard Longwood Psychiatry Training Program and one in child and adolescent psychiatry at Johns Hopkins Hospital (Baltimore, Md.).

Today, Justine Larson, M.D., MPH, is a child and adolescent psychiatrist and assistant professor, Department of Psychiatry, Division of Child and Adolescent Psychiatry, at the Johns Hopkins University School of Medicine. This past September, she also started as senior medical advisor in the Center for Mental Health Services at the Substance Abuse Mental Health Services Administration (SAMHSA).

Interest in Access to Care
Dr. Larson has consistently sought out opportunities to work with traditionally underserved ethnic minority populations. She explains: "I have been drawn over the years to working with ethnic minorities because I have always been interested in working with underserved individuals. These are people who [often] have challenges in accessing health care."
Such challenges can arise from poverty and lack of insurance or even language differences and cultural issues. For example, Dr. Larson worked as medical director for the Arlington County Community Services Board in the Virginia suburbs of Washington, D.C. Arlington County features a sizable Latino population. "There's evidence to show people feel more comfortable being seen in their native language," she explains, yet there is a dearth of Spanish-speaking psychiatrists across the United States. With mental health a taboo topic in many Latino families, providers sensitive to such cultural issues are needed.

Similarly, Dr. Larson learned firsthand about hesitation in accessing health care when she worked on a study in East Baltimore. The study surveyed how urban African American parents reacted to their children being referred for mental health services. Decades ago, area black residents had been recruited for medical research. Dr. Larson found that residents continued to distrust healthcare providers even years later. This was especially true when it came to mental health care and the potential use of psychotropic medications for their children.

Gaps in the Field
Her experiences as a psychiatrist working with underserved populations will help Dr. Larson in her new role at SAMHSA.

Dr. Larson cites as an example the gap between widely recognized evidence-based programs and their implementation in the field, or patients' ability to access such programs consistently—particularly in diverse or underserved populations. "Access to care is a huge problem nationally," she acknowledges. "But there are also disparities for ethnic minorities when it comes to behavioral health care, such as access to treatment for depression or early treatment for depression."

"[At SAMHSA,] I'd like to address these gap issues and help build more of a workforce in mental health," Dr. Larson says.

Opportunity to Make a Difference
To that end, Dr. Larson urges those just entering the workforce to not shy away from working with underserved populations.

Before her appointment at SAMHSA, Dr. Larson had served as consulting psychiatrist to an integrated care program at a Federally Qualified Health Center in Silver Spring, Md. Many of the clients at the FQHC were refugees who had suffered significant trauma. One patient, an African woman, had lost nearly her entire family to ethnic cleansing. Several other patients were unaccompanied minors from Central America who had experienced harrowing journeys to get to the United States.

"Working with the refugee population, it's rewarding," Dr. Larson says. "I'm reminded [from these experiences] that every single person you come into contact with in a clinical encounter has a really rich story behind him or her."

Dr. Larson advises those entering the psychiatry field to visualize what they'd enjoy doing and be creative about to whom they reach out for help. There is room, she says, for people to do the kind of work they really love.


Every Month Is 'Fellow of the Month' Month
Fellow of the Month is a monthly email highlight that features a single Fellow from one of the seven Grantee organizations. The featured Fellow is also displayed on the new MFPCC home page. The Fellow of the Month feature was created by the MFP Coordinating Center to recognize the Fellows and their work, and to provide a better understanding of the disciplines that make up the Minority Fellowship Program. Fellows can nominate themselves, or be nominated by other Fellows, or by the Grantee organizations. The selected Fellow is then interviewed for a brief description of her or his current work and activities and how the Fellow's participation in the MFP has influenced her or his academic and professional growth.

In October, for example, Latonya Summers, a Fellow of the National Board of Certified Counselors, discussed how the MFP validated her identity as a black woman in the mental health field and how it encouraged her to pursue her dream of becoming a counselor. In July, Bailey Mack, an aspiring family psychologist, discussed how her participation in the MFP exposed her to other minorities in the field, which offered her fresh perspectives. The Fellow for November, Cynthia Greywolf, has provided behavioral health care to Native Hawaiians and Pacific Islanders and psychiatric and substance-use care in underserved and homeless communities. She credits the MFP for providing her with amazing support and networking opportunities.

The Fellow of the Month feature encourages engagement across the disciplines, networking among Fellows, and participation within the Grantee community. For more information or to nominate a Fellow, contact mfpcc@dsgonline.com

Thomas presented at the daylong writing workshop ANA held at the Eliminating Mental Health and Substance Use Disparities Through Leadership, Education, and Community Engagement conference, cosponsored by SAMHSA and ANA, in June. The nursing association helps Fellows conduct and write about their research on mental health and substance misuse issues experienced by minority populations.

For her own part, Thomas in 2010 established in her publication the Mentored Reviewer Program, to teach inexperienced writers about scholarly writing and reviewing. In her column, titled "Nurturing the Novice Writers in Psychiatric–Mental Health Nursing" (which you can read in its entirety right here), she reminds unpublished writers that the "invitation to participate in the Mentored Review Program is always open." You can contact her about it at sthomas@utk.edu

Geraldine Meeks Retiring From Social Work Council
Dr. Geraldine Meeks, Project Director of the Council on Social Work Education's Minority Fellowship Program for the past 7 years, is leaving CSWE to focus on continuing her recovery from a stroke she suffered in June.

CSWE is grateful to Dr. Meeks for the mentorship and support she provided to Fellows and Alumni. The Minority Fellowship Program Coordinating Center is indebted to her for her thoughtfulness and guidance, which enriched the behavioral health network.

Tabitha Beck, who has been serving as the interim project director for the past 6 months, will transition to the Associate Director of MFP as of Jan. 1. CSWE will soon open a search for an Executive Program Consultant, to lead the MFP program.

Nine Percent of American Adults Say They Have Conquered Their Alcohol and Drug Dependency
A newly published survey measuring the prevalence and pathways of recovery from alcohol and other drug problems found that 9.1 percent of adults living in the United States reported they "use[d] to have a problem with alcohol or drugs but no longer do." If true, then an estimated 22.35 million U.S. adults have resolved alcohol and other drug problems. The study by John F. Kelly and colleagues also shows that there are many pathways to recovery. For more, see the article in Drug and Alcohol Dependence, 181, 162–169.

HBCU institutions, on behalf of principal investigators (PIs) who must be full-time faculty members at an HBCU, are eligible to submit the following proposals as part of the HBCU Excellence in Research Program:

Dr. Lewis was cited chiefly for the Social Work on the Hill event he has led the past 3 years through his organization, the Congressional Research Institute for Social Work and Policy, which celebrates the achievements of social workers in Congress and the federal government. Readers interested in learning more about Dr. Lewis's own journey can find his autobiographical piece "From the Tough Streets of East New York to Capitol Hill," which appears in Social Work Matters: The Power of Linking Policy and Practice (edited by E. F. Hoffler and E. J. Clark, 2012, NASW Press).